The worlds finest audio makers taking over a mountain village to celebrate and inspire Creative Audio.

In the first HearSay, held in November 2014, over 40 Contributors were involved in nearly 50 Sessions held in 13 different venues. HearSay literally took over the village, with every nook and cranny dedicated to audio, ranging from the sitting room of the priest's house (with hot whiskies!) to the open fire at Teach na Cille (The House of Music) HearSay2015 had over 70 contributors with participants coming from 25 different countries. 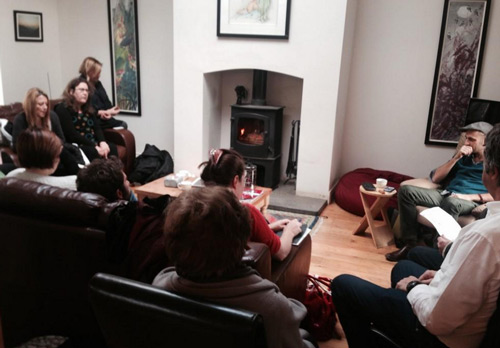 Contributors shared mountain lodges and stories. When we select the contributors for HearSay our criteria is always simple - they should be at the top of their game whether in the world of Film Sound, Audio Features, Sound Art or Radio Drama, and they should be open to sharing their passion. Once a contributor's session is over, they are a participant like everyone else.

The spirit of audio adventure and the energy at festival time is incredible. For HearSay2014, people from as far away as Iceland, Argentina, Turkey and Canada all made their way to Kifinane.

The spirit of audio adventure and the energy at festival time is incredible. For HearSay2014, people from as far away as Iceland, Argentina, and Canada all made their way to Kifinane. There is no charge for coming to HearSay and the festival opens its heart to all those who love audio but spaces are limited. A word of warning - registration for invites to the first HearSay Festival booked out by August last year. Keep an eye on www.HearSayFestival.ie and sign up to the newsletter to get the latest news.

Grey Heron is the lead partner organisation for HearSay.

We contribute our time on a voluntary basis to help make HearSay an inspiring space for those who love creative audio. In the run in to the Festival, we're stuck in everything from working with the great volunteer crew, to securing contributors and venues, designing the programme and delivering on the unique collaborative ethos of HearSay. We're also involved in building partnerships around the Festival and we were thrilled to work closely in 2014 and 2015 with the very creative "In the Dark" team. Other Festival Partners in 2015 included the Broadcasting Authority of Ireland, RTE Radio, Big Bear Sound, and the wonderful Kilfinane Community Council.

Diarmuid McIntyre, the creative director of Grey Heron Media, is the Festival Director of the HearSay Festival working closely with Grey Heron colleagues Mairead O'Connor and Mary McDonnell. In 2016 HearSay is evolving to become a standalone not-for profit but we will continue to work closely to support as it grows.

During HearSay2014 we stepped from out from under our organisers' hats to aptly give a behind the scenes reveal on the Kilfinane-based award-winning documentary "Take no More". We also hosted a very special event "Dark Delights" event - which combines auditory and taste sensations in a live theatrical session. Since then we were asked to do Dark Delights in Galway, Limerick and Belfast in 2015 before creating something truly beautiful "Dark Delightful" for HearSay2015. See
SOUND ART & EXPERIENCES for more.

The HearSay Audio Prize is the much loved cousin to the Festival and operates in the same spirit of audio adventure. Launched in March 2014, the HearSay Prize attracted entries from audio makers from five continents and the entries grew massively for the second iteration in 2015. Sound Art, Composition, Radio features, radio fiction and true stories all appeared. Diarmuid McIntyre was the chair of the 2014 and 2015 prize juries which comprised of some of the best ears working in the world of audio today. New artistic voices blended with established names amongst the 6 prize winners, all of whom travelled to Kilfinane in 2014 and 2015 for the Award Ceremonies.

Keep an eye on www.HearSayFestival.ie for news of the 2016 HearSay Audio Prize.